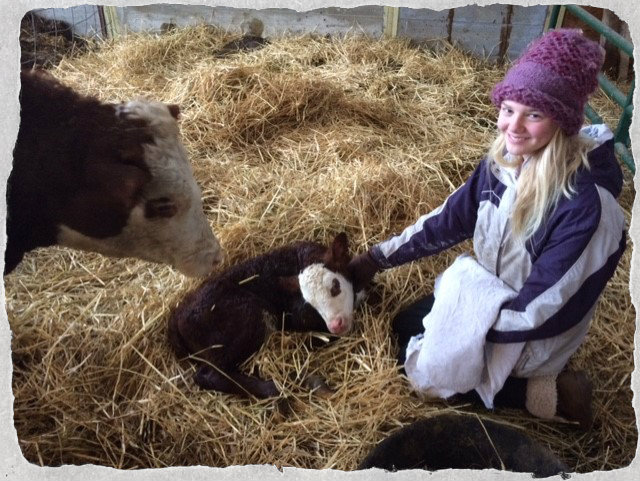 Excitement is running high in my husband and one of my daughters.  They are all set to welcome a pregnant Hereford cow and her yearling.  You would hardly be able to fathom the amount of preparation that has been made for these critters.  I’m not a big fan of critters, in any shape or form, but my husband loves them, and no bride on her wedding day could be more anxiously awaited and prepared for than the Herefords about to arrive on our farm.

He began in February, watching webinars and going to workshops on crop covers.  This summer, he got to dabble in actually using what he’d learned, and spent countless hours planting and caring for the cover crops.  When a cove rcrop was doing well, he’d walk around cheerfully, whistling.  When a cover crop was doing badly, his mood also suffered.  When the crows were eating his seed, his temper erupted and he’d set the dogs on them, and the kids and I knew to stay far away from him!

By fall, he had luscious greenery covering several acres.  He went out one Saturday with my daughter, telling me they were going to put a fence around the new cow pasture.  I had seen the area where he’d planted seed for grazing – a half acre or so – and assumed they were fencing that section.  A few days later, he took me out for a walk to “check the line fence.”  It was no simple pasture he’d fenced in.  He’d created a complicated electrical wiring system that surrounded our entire ten acres, and could be zoned into strips for rotational grazing!

Suddenly, I flashed back to the dozens of hours he’d spent hunched in front of the iPad, watching webinars.  He wasn’t just figuring out how to use covercrops to enhance our strawberry growth, as he told me, he was figuring out how to use a combination of cattle and covercrops to turn our soil into the most amazing mixture of organic matter and nutrients possible, and in doing so, justify getting an entire herd of grass-fed cattle!

Which brings me to the question in the title…Brouwer Beef?  Hmm, I might be persuaded.  What do you think?

I’ve been on a farming adventure for over twenty years, learning how to raise a family and a strawberry crop at the same time.  For a few weeks each year, we have the fun of inviting the community to our farm to enjoy the fruits of our labors.